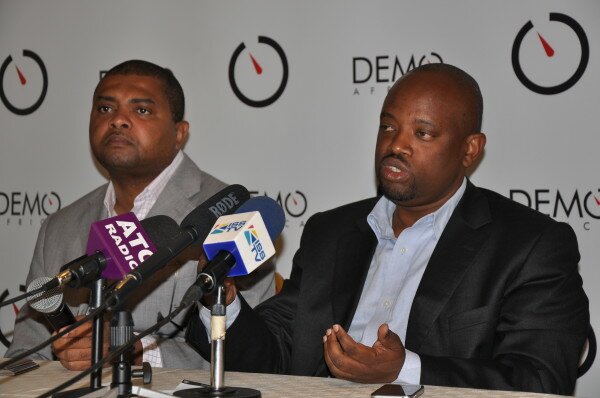 Ali Hussein(Left) one of the DEMO Africa Judges and DEMO Africa Executive Producer Harry Hare address the media to announce the list of the top 40 start-ups schedule to launch in October. Demo Africa is the continent's premier launch pad for emerging technologies and trends

Tech startup launchpad DEMO Africa has announced the 40 startups that will launch at the second annual DEMO Africa event in October, with South Africa leading the way with 12 startup finalists

Aside from the South African finalists, Kenya will launch nine while Nigeria and Egypt will launch four and five respectively. Tanzania had two qualifying startups while Ghana, Tunisia, Zimbabwe, Senegal, Uganda and Morocco will each have one project launching on the DEMO stage.

The startups were picked from 300 applicants drawn from 24 African countries.

“The entries this year certainly kept up with the DEMO Africa spirit to produce innovative and creative ideas that are bound to transform the technology landscape and we are excited by the growth of innovation and technological advancement in Africa as portrayed by our finalists,” said Harry Hare, DEMO Africa executive producer.

“I believe this is a sign that Africans view mobile telephony as an opportunity to solve problems for the consumers on the continent in a financially viable way. This mirrors the increase in mobile penetration across Africa and signals the potential for mobile networks to help many on the continent create wealth and play a role in reducing poverty,” said Muchiri Nyaggah, one of the DEMO Africa judges.

Mr. Nyaggah added that the entries demonstrated the increased need for investment in ICT education to ensure the demand created for mobile solutions are not only exploited by firms from other parts of the world but by indigenous innovators as well.

While the judging process was tough, the DEMO team agreed to work with the finalists to prepare them for the main event.

“While we are not able to support all the ideas and innovation that we received, we will engage the finalists on ways through which they can move their businesses to the next level and polish up on their ideas in preparation to meet their potential investors, partners or clients,” Hare said.

The DEMO Africa 2013 conference, takes place from October 24-25. HumanIPO reported earlier today on Nokia’s platinum sponsorship of the event, while Intel is also a backer.

HumanIPO is also a partner for the event.