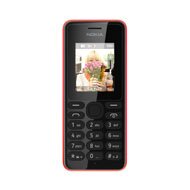 Nokia has unveiled two new ultra-affordable phones, the Nokia 108 and Nokia 108 Dual SIM, aimed at the millions of people yet to own their first camera phone.

Both phone models are almost identical, except for the additional SIM slot in the latter. Priced as low as US$29, the 108 is claimed to be the most affordable camera phone.

The company said with Nokia’s Slam technology on board, content can be shared faster and more easily with friends and family via Bluetooth, while there is also support for up to 32GB of external memory.

“We continue to connect millions of people, including those for whom mobile phone ownership was previously out of reach,” said Timo Toikkanen, executive vice president for mobile phones at Nokia

“There remains a huge segment of the global population that has yet to own a camera phone.

“For the next billion people and beyond, we aim to bring new mobile experiences to ever-lower price points, and the Nokia 108 and Nokia 108 Dual SIM are great examples of this commitment.”

The company further added that the Nokia 108 delivers new mobile experiences without the huge price tag.

The Nokia 108 also features an integrated MP3 player, FM radio, the game Snake the game and a flashlight. for staying entertained and productive while on-the-go.

The battery lasts up to 31 days while on standby.