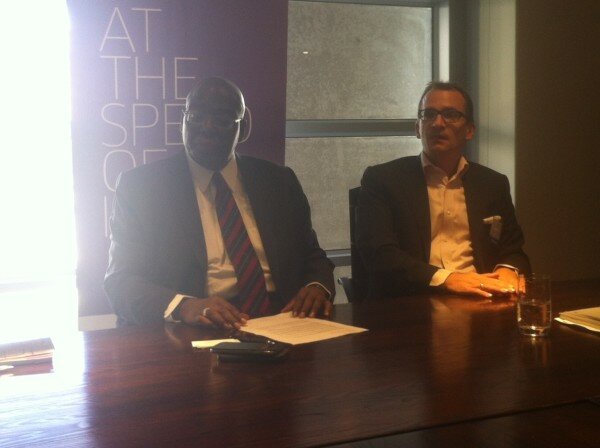 Alcatel-Lucent and Surfline Communications have announced a partnership that could provide Western Africa with its first commercial 4G LTE network – operational in Ghana – by the first quarter of 2014.

Surfline was one of three new players in Ghana’s telecommunications sector awarded an LTE licence by the National Communications Authority (NCA) as the government looks to meet its target of achieving 50 per cent broadband penetration by 2015/2016.

Speaking to reporters at LTE Africa in Cape Town today, Yaw Akoto, chief executive officer (CEO) of Surfline, said the greenfield network would be exclusively focused on data services with voice-over-LTE potentially to follow further down the line.

Akoto said: “The model is primarily to focus on the high end market. We will be looking at targeting high potential residential areas and small to medium sized enterprises. That will be our initial focus.”

The NCA made a conscious decision not to award any LTE licenses to the current crop of mobile operators in a bid to promote competition in the industry as well as recognise the poor quality of voice services they currently offer the public.

As a result Surfline, which will be leveraging of MTN Ghana’s extensive fibre network, will be in a position to offer wholesale data to the major operators further down the line.

Daniel Jaeger, vice president of Alcatel-Lucent in Africa, said they would be providing the infrastructure to Surfline as well as management and support for the network.

He added: “I am very happy that after similar projects we have started down in other part of Africa, that we are how partnering for Ghana.

“I also think it is very nicely showing the development of Central and Western Africa. If you look past the powerhouse of Nigeria, you have Ghana which is showing the fastest growth rates in Africa so I am not surprised this opportunity emerger in Ghana.”

Surfline is a 100 per cent Ghanaian-owned company focusing primarily on LTE services.