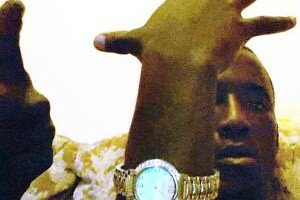 The suspect photo posted on Facebook. Source: The Star

A Durbanite burglar in South Africa will be prosecuted after a picture of himself appeared on the Facebook wall of his victim.


The suspect is believed to have used one of the stolen tablets to identify himself accidently on Barbara McCall’s Facebook wall.


“He probably did not realise he was doing it. Usually you never log off from a tablet, so it could have happened quite quickly,” James McCall, owner of the burgled Hillcrest guest house in KwaZulu-Natal, told The Star yesterday (Thursday).


"I wanted to log on to change our passwords. I was surprised to see activity on Barbara's profile and a picture of the man," McCall said.


James and Barbara McCall’s guest house in Hillcrest, Durban, was the thief’s target last weekend, January 6, while their guests were having a barbeque. The residents only realised a day after the incident that they had been burgled.


According to the couple, the same two men revisited their premises, located next to the highway, on occasions in December, August, July and March last year.


During the most violent visit, they tied up Barbara McCall and threatened to kill her.


Other valuables from guests, including tablets, hard drives, computer screens and laptops have been stolen, as well as a few personal belongings of the McCalls.


“No arrests have been made and investigations are continuing,” Captain Thulani Zwane, spokesperson of South African Police Services (SAPS) confirmed.


The photo will be used as evidence in the investigations.