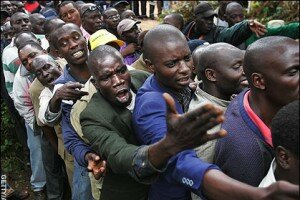 As Kenya approaches its most hi-tech polls, another election portal has been unveiled detailing news from different media houses.

It aims to give balanced news on what is happening regarding the general elections, as well as make it easy for users to jump from one newspaper to the next on political issues.

The portal also highlights the trending topics currently discussed on social media and traditional media. Below the header, it highlights the harsh tags that categorise different news topics.

Elections Kenya is one of numerous online tools that have been launched to monitor and follow election proceedings. On Tuesday, Google showcased several applications developed by Kenyan developers that focus on the forthcoming general elections.

During the 2007/2008 post election violence, Ushahidi, a Kenyan software designed to map election violence hotspots, was born and is now used globally to highlight trouble spots using text messaging or through the Internet.

Analysts say the crave for information before, during and after the elections is -- and will be -- huge, given there are various elective posts being sought by politicians.

The Independent, Electoral and Boundaries Commission (IEBC) has also said it will open its API during the March 4 elections so media houses and other independent websites can map out the results according to information it receives in real time.