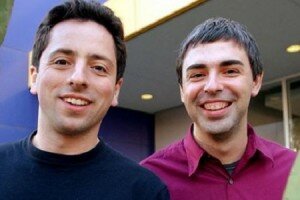 Google co-founders Larry Page and Sergey Brin drew just US$1 each in salaries last year, though they each own company stock worth around US$20 billion.


Page and Brin have capped their salaries to US$1 since Google went public in 2004. It is not an unusual move, as Steve Jobs at Apple and Yahoo co-founder Jerry Yang followed similar policies while earning fortunes through large shareholdings in their companies.


The chief executive officer (CEO) of software developer Oracle, Larry Ellison, also earns a salary of US$1 per year, though Bloomberg reports he actually takes home US$96.2 million, taking into account options awards and other extras.


Current Google chairman Eric Schmidt also took home a salary of US$1 per year when he served as the company’s CEO, but upon Page taking over the position his salary was increased to US$1.25 million, with the potential of bonuses of up to US$6 million.