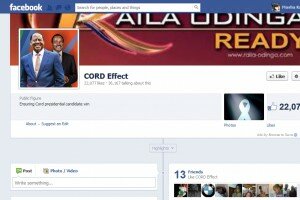 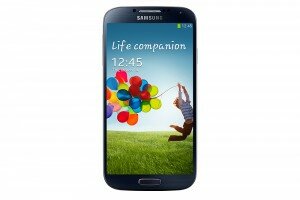 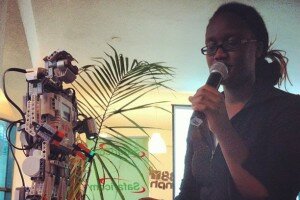 Leah Otieno shows off her robot

Leah Atieno, a 15-year old high school student came out top in the Judges Selection for her brilliant showcase of Alpharex, a 30 inch robot that walks and uses voice commands.

Interested in robotics, Leah says her interest in the event was only social as she sought to meet fellow hackers and developers.

George Mbuthia settled for the second spot with Data Mash, a data visualization and manipulation web tool with Denis Munene edging out other participants for the third position with Ufahamu, a crowd-mapping platform that promotes the fight against malaria.

Leah’s Alpharex was also attracted an extra award for the Best Hardware and Data Mash grabbing the Best Data award. Ufahamu squeezed in the second award by winning the Best Design category.

The other winning team as announced by the judges for the Best Science category included Muon's Flight Path, an animated representation of the flight path of muons, created in the CMS detector by collisions of protons accelerated in the LHC (Large Hadron Collider).

The highlight of the event came on Sunday when 21 teams took to the stage for the demo session. At the end, winning teams were honoured in six-prize categories-People’s Choice, Best In Show, The Data Award, The Brightworks Hardware Award, The Design Award and The DTRA Government Award.

The event brings together developers, designers and people with great technological ideas for a period of hacking and collaboration aimed at encouraging future collaboration, community building and social awareness of one another.

Sponsored by iLabAfrica, Github, Google, Microsoft, Kenya LPI, Poptech and Safaricom, the Nairobi event was the first of its kind in Kenya. Several Science Hack Day events have been held in cities across the world with the next two expected to be held in Chicago and Eindhoven.
Share Tweet