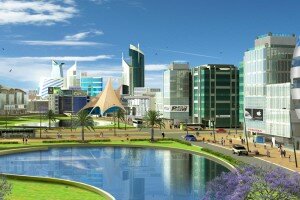 
Speaking at the Ignite Summit, Permanent Secretary in the Ministry of Information and Communication Dr. Bitange Ndemo said that the project was receiving so much foreign investment that reluctant local investors may miss the opportunity to take on space at Konza if they continue to withhold their interest.

Ndemo stressed that the tech city is intended for local businesses, but explained that the investing attitude of Kenyans could be the barrier, as they do not want to invest in concepts and “opt to rush at the last minute”.

“We need Konza for incubation of SMEs,” he said.

Konza Tech City is a government project aimed at creating a modern East African city to host tech businesses and startups. The project lies lie on 5,000 acres of land in Machakos County, about 60 kilometres from Nairobi.

In April this year the number of prospective local investors stood at just seven, with only two of the interested companies from the technology sector, Safaricom and Seven Seas. Lucas Omollo, from the BPO section at the Ministry of Information and Communication said that the numbers have since increased, although he did not provide concrete statistics.

Commenting on the question of undertaking such a project without having the local companies and experts to staff it, Ndemo said that the government had undertaken big projects before, such as the “successful” arrival of the TEAMS cable, and expressed confidence that the construction of the tech city would also work.

Aside from the questions on lack of local interest in the tech city, the project has been dogged by land allocation controversy. The Ministry of Information and Communication was earlier this year accused of flouting procurement rules in acquisition of the land.

In August this year, the Konza project secured a funding of KSh16 billion (US$192 million) from the African Development Bank (AfDB), which will be used for building Konza’s backbone infrastructure.