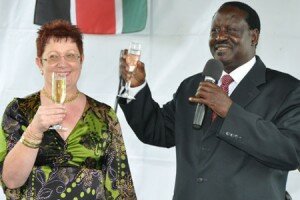 German envoy to Kenya Margit Hellwig-Botte has advised the Kenyan media to be sensitive when reporting election-related news to avoid raising unnecessary tension.


Speaking during a public debate on the election yesterday at Kenya’s Strathmore University, Hellwig-Botte said the media should be objective and report election issues in a non-controversial manner ahead of and after the March 4 polls.

“The media should watch the language it is using on election-related stories and articles,” Hellwig-Botte said. “The election is a contest and not a battle, there will be winners and losers but life must go on.”

She stressed that the German government does not support any one presidential candidate, adding that it “is upon the Kenyans to pick leaders of their choice”.

Hellwig-Botte added that the devolved government units that Kenya now seeks will give counties powers to end impunity by ensuring law and order.

According to a judge at the Court of Appeal in Kenya Dr. Luis Franceschi, as much as the country had independent media, the media and electorate are susceptible to manipulation by the politicians.

“Democracy is yet to reach grassroots with the political parties still revolving around personalities despite a new constitution being in place,” he said, as quoted by The Standard.

Impunity and chaos, which have been blamed on irresponsible broadcasting by the Kenyan media, have characterised elections in Kenya for more than two decades.

After the 2007/2008 post election violence, the media has been criticised for propagating information that fueled commotions, such as a case where Joshuaarap Sang, a former radio journalist at Kass FM, is accused by the International Criminal Court (ICC) for contributing to the commission of crimes against humanity through his programmes.