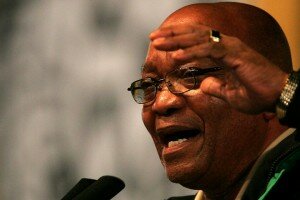 President Jacob Zuma used his State of the Nation address to recognise technology could play a crucial role in improving educational standards in South Africa, though technology formed just a minor part of the speech in general.


Zuma admitted the country was not doing enough to ensure the teaching of technology in schools countrywide, noting: “more must be done to improve maths, science and technology”. He announced the creation by the Department for Basic Education of a national task team entrusted with furthering the implementation of the country’s Mathematics, Science and Technology Strategy.

The President called upon private sector players to assist the government in the goal of improving technology education by establishing or sponsoring academies and weekend schools.

In a brief direct reference to the tech sector, Zuma highlighted that 7,000 kilometres of fibre-optic cable was rolled out over the space of last year, while adding that the country’s Internet penetration targets remain unchanged.

“The plan is to achieve 100 percent broadband Internet penetration by 2020.”

Turning to focus on the issue of crime, particularly violent crime committed against women, Zuma acknowledged the rise in electronic abuse and stalking, saying the issue would be directly addressed in law.

“The Protection from Harassment Bill also deals with harassment by persons who stalk their victims by means of electronic communications,”  the President said.

Zuma also revealed the government has taken note of the rise is social media.

Thanking people for contributions submitted in preparation for the address, the President added: “I received several messages via email, Twitter and Facebook.”