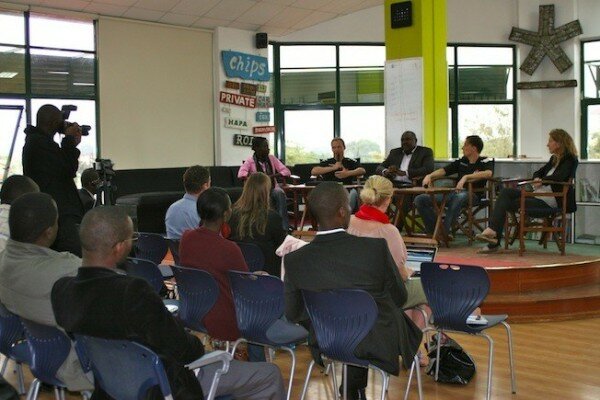 The IPO48 will kick off with its 2nd edition in Nairobi tomorrow. A press-conference was held today @iHub, where also a brand new investment company 88mph was launched which will invest 400 000 € in Kenyan ICT businesses.
Both the investment company and IPO48 look carefully where they invest – it is about people and their entrepreneurial passion.

Last year’s winners the M-Farm, and its CTO & Co-founder Susan Oguya backed it up by saying that M-Farm was always about the farmers, not about the money. But in order to empower anything, passion and focus are imperative. A year after having won the IPO48, their company has been able to expand and broaden their network, having landed interesting exporting contacts from Europe. All that thanks to the investment won, the mentorship given, and due to the three M-Farm ladies’ own dedication, as all three have quit their day jobs in order to push M-Farm forward.

This kind of passion is what the IPO48 investors will be looking for at this year’s edition, too, when investing their 25 000€.
“In the space of only one month or so the IPO48 Nairobi saw over 60 business-ideas uploaded to the platform, with over 2000 comments made and 200 pages of advise given by the mentors and followers from US, Denmark, Spain, Kenya, UK. So the 13 finalists are much more prepared to meet the onsite mentors,” said Kresten Buch, the co-founder and CEO of HumanIPO.

This year’s competitors have not been picked for specific sectors. It has been about the people, since there was a lot of debating on-line, on the IPO48 platform, prior to the event which helped give better sense of the people behind specific startups. “For me this is what it is all about. The person. I prefer that one-on-one interaction to a 15-page business-plan that might or might not have been written by that person, “ Buch stated.

According to Kresten Buch most ideas change. “M-Farm had initially a very broad idea – they have also changed a lot what to focus on. As a lot of us mentors, and the HumanIPO founders, are also entrepreneurs we understand that the ideas and how they will be executed, will change. The idea is not that important, it really is the person.”

The IPO48 Nairobi kicks off tomorrow, Aug 12, at 16.30 and will announce its winners on Sunday, Aug 14. Besides the 25 000€ investment, one of the teams will get a prize offered by the Nailab, the incubation lab that supports small businesses and savvy entrepreneurs, in the value of 5000$, incubating the winner for 6 months in their premises.

For the first time selected IPO48 participants will have also a chance to participate in a workshop by one of Scandinavia’s most known business consultancy companies, Quartz+Co. In two intense days, on Aug 16 and 17, Quartz+Co aims at helping the startups get off the ground, identify and start on the actions they should be focusing on during the first three months. Also, other special prizes and surprises will be revealed during the event.