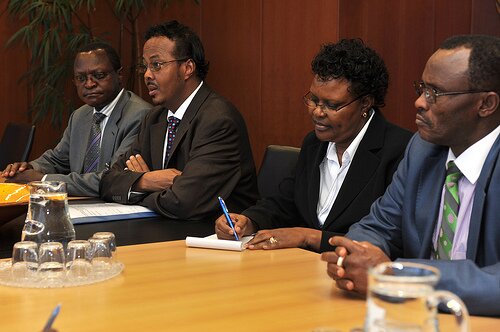 Kenya’s parliamentary investment committee (PIC) is seeking answers regarding the circumstances that led to the dilution of government shares by 19 per cent in the country’s oldest telecommunications firm Telkom Kenya.

The committee summoned the auditor-general and the Privatisation Commission to establish how the government lost its grip on the network operator when France Telecom was given a majority shareholding of 60 per cent.

Adan Keynan, PIC chairman, questioned how government had its shareholding diluted to 30 per cent from 49 per cent at a time when the country was going through elections.

“The transactions took place in the election mood and when the budget was being closed,” Keynan said.

“According to our credible sources, the transfer was done on December 31, 2012 and June 30, 2013, and these were critical moments in the country.”

Solomon Kitungu, Privatisation Commission chief executive officer (CEO), said he was not aware of any transaction between the government and France Telecom.

“If there was any transfer of actual shares from the government to France Telecom, then it is news to me and it was against the law,” Kitungu said.

The committee members further asked why Kitungu was not involved in the transfer of the shares even though the commission on privatisation was formed five years ago.

The Privatisation Commission, which was formed in 2008 under Privatisation Act of 2005, with a mandate to formulate, manage and implement the country’s privatisation programme.

The commission also oversees the transfer of government commercial activities and operations to the private sector in a transparent, predictable and equitable manner, in collaboration with key players.

Telkom Kenya was privatised in 2007, with the government pumping in KSh80 billion (US$913 million) to the company.

The government stake in Telkom Kenya stood at 49 per cent in November last year, but dropped to 40 per cent in December following a KSh34 billion (US$388 million) balance sheet restructuring plan.

This further dropped to 30 per cent in June this year, after Kenya’s exchequer failed to make a capital injection of the remaining part of KSh4.9 billion (US$56 million) it was required to put in the operator’s KSh10 billion (US$114 million) cash call.