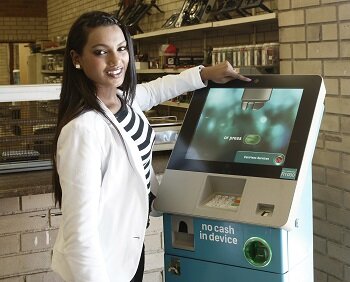 First National Bank (FNB) has launched Africa’s first Slimline ATM, which delivers electronic banking to retail environments in remote areas where a conventional ATM is not supported by the volume of business.

The FNB Slimline ATM is equipped with a large touchscreen, a card reader for chip and PIN enabled cards, an integrated camera and a numeric keypad.

Slimline ATMs do not dispense cash, but rather they issue a slip, which is then cashed at a retailer’s till. The retailer’s account is then credited.

“We developed this as a unique technology to address access to banking in a way that deepens functionality and brings full digital banking to our remote sites,” said Aziz Carrim, head of self service channels for FNB.

“We sourced components from our established ATM suppliers and included comprehensive software upgrades to enable account interaction such as transfers and payments.

“In the process we created a unique ATM designed specifically for emerging markets and lower income needs.”

Carrim said the Slimline ATM has potential across all FNB’s market segments, including both personal and business aspects because of its electronic banking capabilities.

960 Slimline ATMs have already been installed in South Africa by FNB, and the Slimline service will be extended to other African countries where FNB has subsidies.