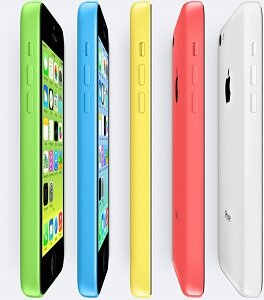 Apple has launched two new mobile devices, including a cheaper smartphone, the iPhone 5c, for the first time.

The iPhone 5c was launched alongside the high-end iPhone 5s, with Apple describing its new flagship mobile as “the most forward-thinking iPhone yet”.

It includes the expected fingerprint sensor as well as an 8 megapixel iSight camera.

“iPhone 5s is the most forward-thinking smartphone in the world, delivering desktop class architecture in the palm of your hand,” said Philip Schiller, Apple’s senior vice president of worldwide marketing.

“iPhone 5s sets a new standard for smartphones, packed into its beautiful and refined design are breakthrough features that really matter to people, like Touch ID, a simple and secure way to unlock your phone with just a touch of your finger.”

The 5c is Apple’s first foray into the ‘budget smartphone’ market, potentially opening up a new audience for the technology giant.

It will also feature the 8 megapixel iSight camera, but retains the 4 inch retina display and contains the A6 chip, compared to 5s’s new A7 chip.

“iPhone 5c is everything iPhone 5 was and more, in an all-new design packed with great features,” said Schiller.

“iPhone 5c is designed with a beautiful polycarbonate enclosure that looks and feels so solid in your hand.”

Both devices will run on the new iOS 7 operating platform, which has new features including Control Centre, Notification Centre and enhanced Photos.

Importantly, the operating system includes iTunes Radio for the first time – a free internet radio service based on music the user listens to on their iTunes.

“iOS 7 is completely redesigned with an entirely new user interface and over 200 new features, so it’s like getting a brand new device, but one that will still be instantly familiar to our users,” said Craig Federighi, Apple’s senior vice president of software engineering.

The iOS 7 update is free for iPhone, iPad and iPod Touch users and will be released on September 18.

There are no African country launch details as yet.