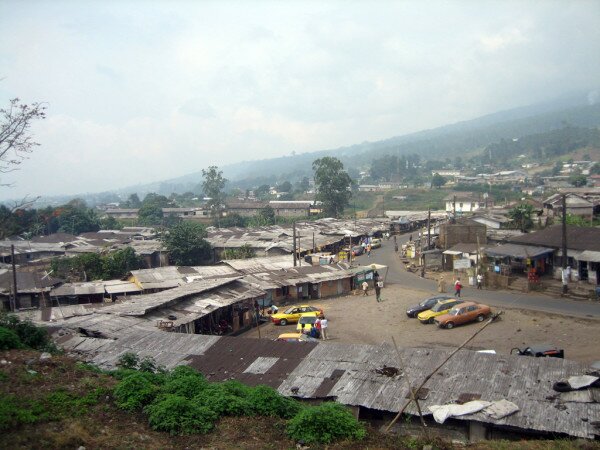 The Cameroonian town of Buea. CC image courtesy of Bill Zimmerman, on Flickr.

Cameroon has an open, under-regulated consumer market with lots of potential, but currently held back by economic and political corruption, according to Al Banda, community manager at incubation hub ActivSpaces.

ActivSpaces is a combined co-working space, business accelerator and tech incubator in Buea, the capital of the southwest region of Cameroon.

Banda told HumanIPO Cameroon’s market had the potential to produce numerous successful ICT businesses, but that the difficulty of doing business in the country is holding it back.

But Banda said the country was being held back from taking advantage of these opportunities by the political and economic climate. In this year’s ‘Doing Business 2013’ report by the International Finance Corporation (IFC) and the World Bank, Cameroon was ranked 161 out of 185 countries, falling five positions from the previous year.

Banda puts this down to “an economic and political climate rife with corruption and nepotism”.

“If you know the right people you can soar. So only the few soar and they often fly solo,” he said.

He believes that with the right groundwork Cameroon does have the potential to compete on a global scale through ICT.

“There’s a lot of infrastructural and educational ground that Cameroon needs to cover to scale up its ICT sector,” Banda said. “However, sometimes all it takes to complete globally are a few brave geniuses. I’d daresay we have some brave geniuses in Cameroon and I know a good number of tech entrepreneurs who are already taking their business global.

“As the tech community blossoms and we position ourselves right, there’s no telling what may crop up.”

Banda said ActivSpaces was this month marking three years as a tech hub, which he said was an important milestone with Cameroon having an ease of doing business rating lower than that of Afghanistan.

“In a nutshell, we see ourselves as a launchpad activating innovation for positive social impact,” he said. “We serve our community as a hub where forward-thinking entrepreneurs can gather around the tools, resources and knowledge that will help solve the cultural, economic and political challenges of the day.”

Membership of ActivSpaces is open to anyone with an active project, which is then screened against criteria such as originality, added value, readiness and team strength. The hub is funded by organisations such as The Indigo Trust, Google and the Salesforce Foundation, as well as enterprise software company AppsTech.

“At ActivSpaces it hasn’t really been about the high points, which have been memorable, but more about the tangible points: the nervous techie turned community asset, hiring a dozen employees, providing business for scores of farmers, serving hundreds of households. This is what we work to see – innovative development,” Banda said.

“I believe that ActivSpaces will be the backbone of feature technology entrepreneurship in Cameroon in the next ten years. We’ve learned the ropes of incubation and business acceleration in Cameroon and it is time for larger strides. Partnerships with more universities, government programs and grassroots organisations. It is time for the ActivSpaces spirit to go viral.”