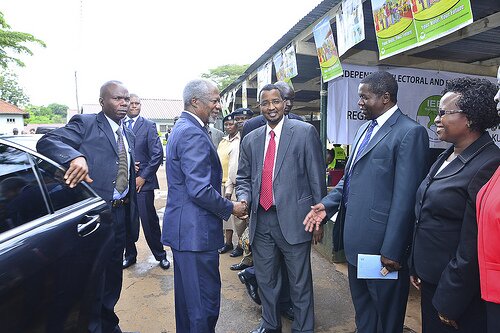 The officials are accused of using their offices inappropriately to benefit Face Technologies, the company awarded the supply tender, by approving the payment of KSh1.3 billion (US$15.3 million) for the supply of the devices without ascertaining that they were inspected, accepted and met the technical specifications in the contract.

The four were arrested by detectives from the Ethics and Anti-Corruption Commission (EACC) and were arraigned in court today (Wednesday) where they were charged with four counts of abuse of office and failure to comply with procurement rules.

EACC officials said the commission had been conducting an investigation into the electronic voter identification kits, the failure of which during the March polls sparked public outrage.

Yassin Yila, EACC spokesman, said the four had their fingerprints taken and were formally informed they were under arrest and the offences facing them disclosed.

The arrests came after the Director of Public Prosecutions (DPP), Keriako Tobiko, agreed with the EACC that the four should be charged with four counts of failing to comply with procurement laws and abuse of office.

HumanIPO reported in March the IEBC IT chief had warned on the BVR failure weeks in advance of the election.

The electronic systems collapse caused counting delays in major polling stations during the elections, a situation which took centre stage during the presidential election petition, when the CORD coalition said the failure of the system created loopholes in which results could have been tampered with.

However, the IEBC conceded the technology failure and that there were severe challenges during the country’s general elections in March, but said it did their best.

It will be the first time that electoral officials in Kenya are charged for hitches that marred the general election.

The probe was launched following a Supreme Court order on conclusion of the presidential election petition where they recommended the prosecution of top IEBC officials.