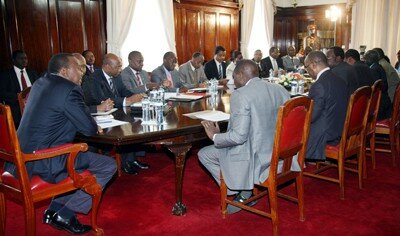 Kenyan president Uhuru Kenyatta has directed that the clearing process at Mombasa Port be digitised and ordered the commissioner of customers to relocate from Nairobi to enhance efficiency at the Kenya Ports Authority (KPA).

Speaking during a meeting to specifically address inefficiencies at the port, Kenyatta ordered all government departments involved in the running of the port to streamline and synergise their operations.

The president also demanded the modernisation of cargo weighing and the upgrading of the Simba system, as well as the fast-tracking of the single window system to automate the clearing process.

He said roadblocks will be replaced with mobile traffic surveillance, and urged the private sector to support the electronic vehicle tracking system and help it take effect without further delay.

During the meeting, the KPA was given a full mandate to institute immediate disciplinary measures to those who do not adhere to the agreed instructions.

The president also said the Transshipment Bond should be abolished with immediate effect, adding that the Clearing and Forwarding Service companies and transit sheds located inside the port should be removed to ease congestion.