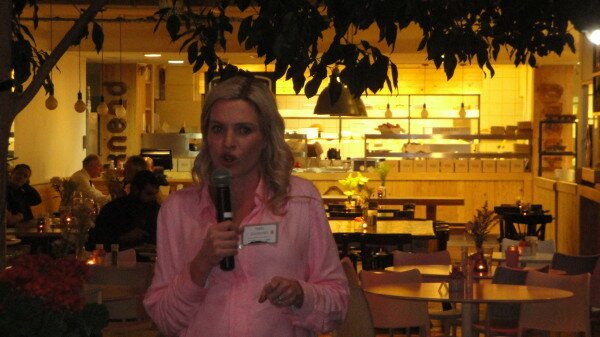 Nikki Cockroft, head of online at Woolworths. Photo by HumanIPO.

South African digital business industry rolemodel Nikki Cockroft spoke to HumanIPO about the challenges of being a female in the field as she prepares for motherhood, while continuing her career.

South African digital business industry rolemodel Nikki Cockroft spoke to HumanIPO about the challenges of being a female in the field as she prepares for motherhood, while continuing her career.

Head of online at Woolworths and chairperson of the Digital Marketing and Media Association (DMMA)’s Bookmark Awards, Cockroft will be stepping down as executive soon to assist  women of colour in the industry.

HumanIPO: What are your ideas around being a mother and a businesswoman?

Cockroft: It is totally do-able. I don’t think it’s a sacrifice that you can’t have it all. Our lives just become fuller.

I think it is a perception thing that you are going to give up something and choose motherhood.

I choose both. I choose life. I choose family and I choose work.

Many women feel their voices are being pushed aside in male-dominated  boardrooms. When should woman put their foot down and make their opinion count?

On the senior level in digital, I was the only female on a board of males in an agency. I don’t think it should be that way, it is wrong. There is no excuse for that. I think that is old school.

If you do anything in a rude way, don’t expect to get the respect. Respect is earned.

If I can’t trust somebody, I can’t respect them. Trust is harder to earn than respect.

I don’t think that there is ever, ever an excuse for women’s oppression. Women in this country fought against oppression on our behalf.

I know what it is to be bullied in a boardroom.

There is a time to do it (stand up) and a time not to do it. You have to respect people as well at different times in different approaches.

What are the differences of working with women and men in the industry, would you say?

I must say I work in a very women-dominated business as well and that has as many shortcomings because you are working with women, it’s not all about women’s empowerment.

We talk about being oppressed by men, women give women a bad name and oppress ourselves. How women behave in the boardroom is what lets women down.

It’s not about what men do because one woman at that table sits and uses her sexuality to sell and that is what lets women down, not men…and I strongly believe that.

We are so quick to say it is men who do this to us. No, we do it to ourselves.

Do you feel women are more competitive in the digital work space?

It is the perception of competition. Men are competitive, but they put failure behind them.

Are there certain experienced-based notions you will carry across to your children?

Don’t judge others. Judging others means you’re not self-aware.

When their child sits inside playing computer games, lots of parents think they have to go play outside, it’s a bad thing.

I think if your child is that computer geek, I think they don’t want to go play rugby or hockey, they don’t.

So why force a child? I think just let children be what they want to be. I don’t think that is a negative thing for children who like computers.