OPINION: The fate of the Christian faith in the wake of technology 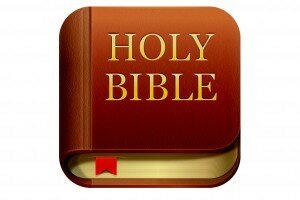 Last night on my way to the prayer meeting at my church, I subconsciously went with my King James version of the Bible, my Samsung Galaxy Tab and Nokia Lumia phone.

The preacher asked us to open the book of Psalms 26. My instinct was to go for the hardcover Bible, but when he directed us to go to the book of Joel, one of the more unpopular books in the Bible, I went for the YouVersion’s Bible app on my Android device.

I’m not the only one who is taking to technology to access contents of the Bible.

As a matter of fact, many preachers deliver sermons with the aid of IT gadgets such as iPads.

To our advantage, we argue that Bible apps allow us to incorporate spiritual obligations into our high-paced lives. Furthermore, the relative ease that comes with technology allows users to cover more ground with little effort.

However, technology in Christianity also poses a unique desecration challenge which is the unthinkable cohabitation of the spiritual words of the Bible with other unclean contents that may be stored elsewhere on the same device, sometimes occupying more space than the holy scriptures.

Take my Nokia Lumia for instance, 80 per cent of the file storage is occupied by songs, a large fraction of which are hip hop songs.

I am not sure God would like His word to occupy less space (982KB) compared to Rick Ross’ Teflon Don sophomore album (125MB).

I have also seen individuals that have Bible apps competing for space with high-definition pornography flicks.

However, technology tools such as livestreaming on the other hand are making it possible for individuals in any part of the world to attend live services via various devices including the Xbox.

This has been quite useful in crisis-prone areas where large congregations are targeted.

Furthermore, in large churches, applications such as EasyWorship give clarity to somehow abstract spiritual theories and annotations and platforms such as SoundCloud are allowing churches to store messages in the cloud.

In all, it has become clear that technology is not in any way a hindrance to Christianity here or elsewhere – it is how individuals apply it.

And going by the scriptures (1 Corinthians 10:31) which says: “So, whether you eat or drink, or whatever you do, do all to the glory of God,” we can say God is not against technology.

As a matter of fact, he foresaw the potentials of technology as documented in Genesis 11:6.

“And the Lord said, “Behold, they are one people, and they have all one language, and this is only the beginning of what they will do. And nothing that they propose to do will now be impossible for them.”