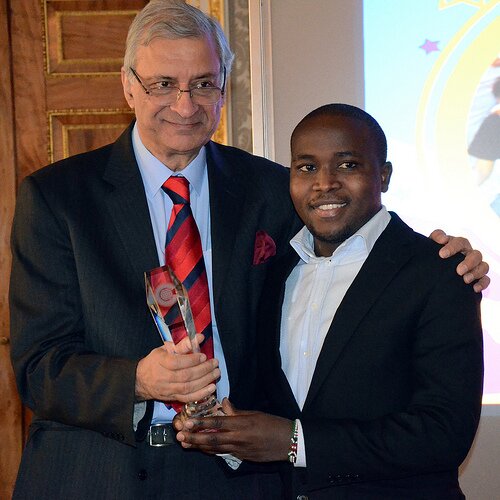 MIT Technology Review has revealed its top 35 young innovators, with Kenyan Evan Wadongo honoured as a humanitarian for his work in the field of energy and sustainable development.

The magazine aims to identify important new technologies through deciphering their practical impact and revealing how they will change lives.

Wadongo, 27, was honoured for his role in economic transformation for the people of Chumvi, a village in Kenya , through providing them with solar-charged LED lanterns at an area where electricity is privilege.

Through his organisation, Sustainable Development For All, Wadongo has distributed thousands of solar lamps to rural villages across Kenya and other African countries, and helped hundreds of women’s groups set up income projects from the money they would otherwise have spent on kerosene.

“Their economic situation is improving, and this is really what keeps me going,” said Wadongo.

“The impact of what we do is not in the number of lamps we distribute but how many lives we can change.”

For over a decade, the MIT 35 innovators project has recognised a list of exceptionally talented technologists whose work has the potential to transform the world.

“For our 13th annual celebration of people who are driving the next generation of technological breakthroughs, we’re presenting the stories in a new way,” MIT said on its website.

“The Entrepreneurs are turning technologies into viable businesses.

“The visionaries are anticipating how technologies can make life better, while Humanitarians are concentrating on expanding opportunities. And the Pioneers are exploring new frontiers, setting the stage for future innovations.”

The project begins with nominations from the public and MIT Technology Review editors.

The editors then go through the hundreds of candidates and select fewer than 100 finalists, all of whom will be younger than 35 on October 1, 2013.

A panel of judges rates the finalists on the originality and impact of their work. Finally, the editors take the judges’ scores into account to select the group.

Jason Pontin, editor in chief and publisher, said: “Over the years, we’ve had success in choosing women and men whose innovations and companies have been profoundly influential on the direction of human affairs.”

Other notable winners this year include Dmitri Alperovitch, 32, co-founder of the security company CrowdStrike who wants to help cyber attack victims strike back.

One of the youngest to be awarded this year is 25-year-old Steve Ramirez, an MIT grad student who can find and even change memories in a mouse’s brain.