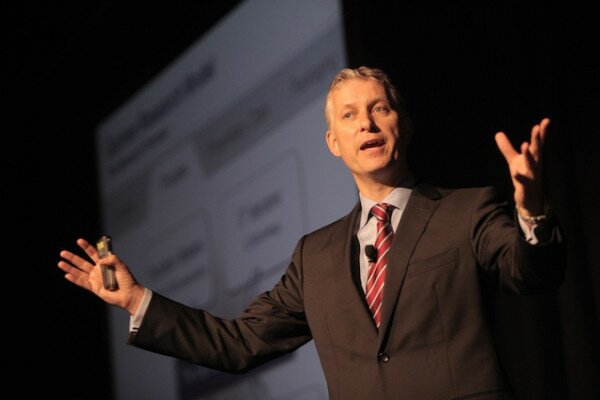 Smart devices are taking over the world and technology will continue to change, increasingly impacting the digital industrial economy, according to Peter Sondergaard, senior vice president of Gartner.

During his presentation at the Gartner Symposium in Cape Town today, Sondergaard referred to some of Gartner’s predictions in terms of technology in business for the next seven years.

He asked the audience to imagine it could time travel and go to the year 2020.

Sondergaard spoke of the changes technology is making to business in three categories, namely business processes, the business model and business moments.

“Then (in 2020) the processes, services and products of the organisation, it’s value change and ecosystem have been fully digitalised. The speed at which technology allows you to realise the business moments, you will be operating at an accelerated speed of digital time.”

Sondergaard added: “Information is now your most important asset, but also your worst competitor.”

He said the role of IT within the digital industrial economy in 2020 will be to coordinate all technology across the company, not only the “traditional back office” information technology as opposed to the role IT currently plays, which is to only lead digital strategies.

This role, according to Sondergaard, comes in five key points and characterises the digital industrial economy.

These include a focus on the business technology architecture, focussing on defining the entire enterprise information architecture, cyber security throughout the organisation in question, the responsibility for the development of digital leadership and digital specialist skills and management of the industrialised IT ecosystem.

Sondergaard said the description of the IT sector in 2020 is far from what it presently is because it has broader, but recast priorities.

“Leaders in the digital organisation will not be the CIOs (chief information officer). It will be the digital business leader…” who will be responsible for the above five key points.

Sondergaard said there are three aspects responsible for this change. The first is the global economic crises of 2009 because it created a conflicting view of the global competitive environment.

Second is the confluence of cloud, mobile, social, and big data, which Sondergaard dubbed “the nexus of forces”.

The third aspect is the integration of the physical world in the form of the “internet of everything”.

“When we sit in 2020, what has happened is the real and virtual technology worlds become one. Consumer IT and organisational IT become one. Digital became the business, and this created the digital industrial economy, which in 2020, will be the norm,” said Sondergaard.

Sondergaard said 20 per cent of computers by 2017 will be learning as opposed to simply processing.

“No matter what business or service you deliver today, digitalisation will change it,” said Sondergaard. He added the industrialisation of technology was introduced with the advent of cloud computing.

“As the nexus joins the physical world, with the technologies like smart machines, robotics, and autonomous vehicles, these extensions to the nexus will create… highly automated, predictive security that runs in digital time,” said Sondergaard.

Sondergaard said devices are largely transient, and an example of this “today’s flashiest mobile device may in fact be tomorrow’s embarrassment”.

A digital industrial economy will be ever changing, and much the same as mobile devices being transient, internet based giants such as Facebook, Twitter, and Google may not be the leaders in their respective areas in the next digital decade.

“Digitalisation is creating an accelerating startup environment across the globe.”

Gartner predicted that through the digital industrial economy, labor reduction effects will cause social unrest in mature economies by 2020.