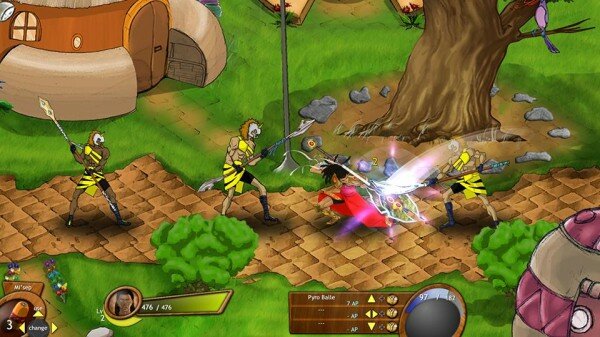 Cameroon-based Kiro’o Games has created the first African fantasy game, AURION: Legacy of the Kori-Odan, as it looks to boost African gaming with locally relevant content.

Recently selected on VC4Africa’s September Cohort, Kiro’o Games’ new release aims to create a masterpiece in the genre of African fantasy, not only visually but also in gameplay.

Founder Olivier Madiba spoke to HumanIPO about his inspirations, African game development and challenges in the sector.

Olivier Madiba: We started to think about “African fantasy” games at the end of 2012. When I finished the writing of the scenario of AURION for a pro version we were not satisfied. Because “African Fantasy” was cool but we wanted to take more step forwards. So we designed a potential “formula” of creation. The basis of the “Kiro’o Tales” is the “African Fantasy” concept, but with a precise set of rules for narration, illustration, design, and audio.

We wanted to create a complete new style for multimedia products. The creation of the studio is well related in our pitch video. I think it will takes less time to see the short video to understand our 10-year journey.

What made you realise you wanted be a games developer?

Olivier Madiba: I was 14 years old, and I was finishing Final Fantasy 7 on PlayStation 1 for the fifth time. On my last fight with the final boss, I was thinking about the possibility to react in real time and not just to always endure the attack. And with my brothers we were imagining the potential alternative scenarios of the games. This feeling is what puts me on the rail about the game design. I started to think about creating myself the “perfect RPG” to make people enjoy, like Final Fantasy 7 was fun for me.

When I was 18, I went to university and I started to read online about game design. I figured that it was not impossible and I started to create AURION, step by step, version by version, and I was joined by two great friends – Hugues and Dominique.

Tell us about the AURION: Legacy of the Kori-Odan? How is it so African and different from any other games in the market.

Oliver Madiba: With AURION: Legacy of the Kori-Odan we want to create the first ever game based on African fantasy, with the “Kiro’o Tales” method. We want to create universal drama but with a lot of narrative basis inspired by our lores on Africa and also our story.

Even if we will not reinvent the wheel, we will not serve a common game with just an African packaging, we are coming with our own gameplay innovation, like the “cognitive battle event”.

For Africa, there is a lot of great games on mobile, but there is not an international good game for PC or Xbox or PlayStation. So AURION must be the first African game with international quality on these platforms. Young Africans do not read a lot, but they play. They play games of sport and war, but no RPG. But now that they will recognise themselves in the main characters, it will be a great means to share the wisdom of life with the young in our society where we couldn’t industrialise the oral transmission.

We understand your raising funds for Aurion. Are Do you have a targeted amount you want to raise?

Olivier madiba: First and most importantly, everyone can be a shareholder of the studio if you invest US$830. We have created a legal fundraising procedure on our own where people can write to us through [email protected] with “interested to invest” as the subject.

Our fundraising is going well. We are raising a minimum of US$220,000 and we are doing it by private equity.

November with what we already got.

Is the game available only on PC? How much will it cost to buy or download?

Oliver Madiba: We are developing it on XNA framework (or Monogames, we are making a test to finalise our choice) so it will be available also on Xbox360 via XboxLive Arcade. The final cost is not set, it will depend on the market state at the release, but I can say that we will be the half the price of the other games with the same potential, our simulations are based on a very low price without taxes.

Has Africa accepted the concept of developing games considering its cost?

Yes. In South Africa, North Africa and West Africa there is a lot on support for game developers. The industry is setting up little by little. In Central Africa we are the first and it is a little bit more difficult to make them understand the opportunity. But it is starting to change with our project. If we succeed it will open the eyes of many people.

What key African culture is embedded in the game?

Olivier Madiba: In fact there is not an “African Culture”, there are a lot of African cultures.

For example, in our prologue demo, in Zama (the city at the beginning), characters Enzo and Erine are going on a trial underwater to speak to their ancestors to get a blessing for their wedding. It is inspired on the “Ngondo”, a traditional ritual of the Sawa, my ethnic group.

What are your key challenges and how are you overcoming them?

Olivier Madiba: Fundraising. The hardest part was to gets the first investors, you know there is always the fear that we are a scam. Now that we have started to get money from all around the world, and that we have this large press coverage, people are more confident.

The game must be released in mid-2014, we want to avoid the end of the year because it is the time of the “big games” in the gaming press.