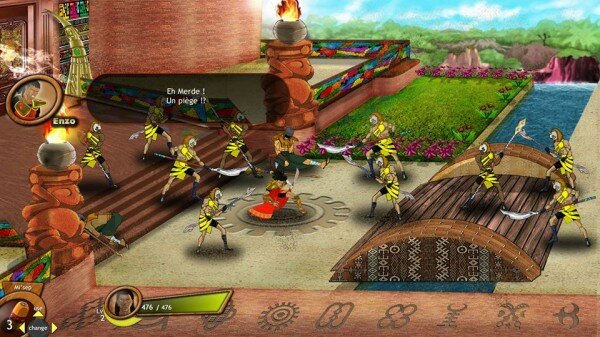 Cameroon-based Kiro’o Games has created the first African fantasy game, AURION: Legacy of the Kori-Odan, as it looks to boost African gaming with locally relevant content.

Recently selected on VC4Africa’s September Cohort, Kiro’o Games’ new release aims to create a masterpiece in the genre of African fantasy, not only visually but also in gameplay.

Speaking to HumanIPO, Kiro’o Games founder Olivier Madiba said: “With AURION: Legacy of the Kori-Odan, we want to create the first ever game based on African Fantasy, with the “Kiro’o Tales “ method. We want to create universal drama but with a lot of narrative basis inspired by our lores on Africa and also our story.”

Role-playing games (RPG) are characterised by various types of games and environments, but designers have focused mostly on American, Middle Eastern and Greek cultures.

Despite Africa being second largest continent in the world with rich and diverse ethnicity, the African culture and methodology in video games have thus far taken a back seat.

According to Madiba, Africa is fast accepting the concept of developing games, even though it is not a cheap venture.

“In South Africa, North Africa and West Africa there is a lot of support for game developers. The industry is setting up little by little. In Central Africa we are the first and it is a little bit more difficult to make them understand the opportunity. But it is starting to change with our project. If we succeed it will open the eyes of many people,” he said.

He said African children value the gaming industry as much as those in developed nations, and are only limited by the cost of the consoles.

“Their only limit is the money,” he said. “It is really difficult for them to buy a game at the standard price, so they download a lot on hacker websites. But for the next generation of games, it will really not be possible, games will be too huge and protection stronger.

“So they will not play at all if they remain on international games. With AURION they will have the opportunity to continue to play great games without the need to hack it, because our price will be very low.”

The company is raising funding through Indiegogo, and Madiba said the game will be released between June and November 2014.