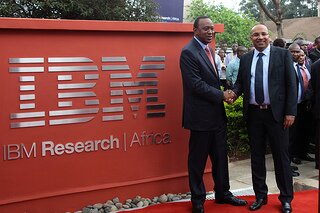 IBM’s recruiting team has announced that it is inviting professors, scientists and qualified university students to participate in a Research Virtual Recruiting Event today (Thursday) for several open positions at the recently opened IBM Research Africa Laboratory, in Nairobi.

The lab was opened by President Uhuru Kenyatta last month and is IBM’s twelfth research lab of its kind in the world and its first commercial technology research facility.

“IBM recognises the huge potential impact of research and smarter systems in helping to build Africa’s future,” said a statement on the company’s website

“Recruiting great employees is vital to our success and to building a Smarter Planet. So join us for our Research Virtual Recruiting Event on 5 December 2013 @ 19:00 EAT.”

IBM said with a growth rate expected to average 7 per cent annually over the next 20 years, Africa is poised to become a leading source of innovation in a variety of industries.

Speaking to HumanIPO Kui Kinyanjui, communications manager at IBM Africa, confirmed the virtual event will take place today with Osamuyimen Stewart, chief scientist of IBM Research, together with Anne Onsarigo addressing the IBM agenda on research in Africa and job openings, skills and how to apply respectively.