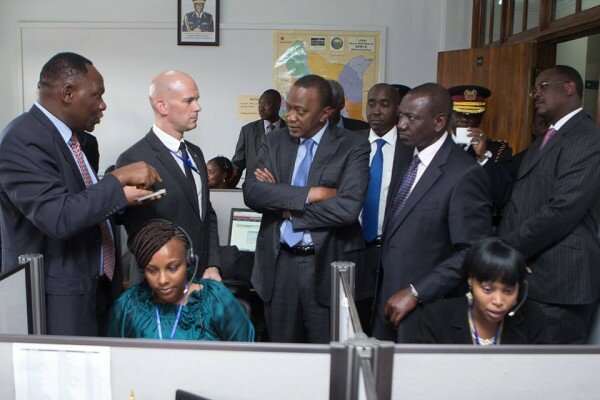 Bitange Ndemo illustrates to President Kenyatta and his deputy William Ruto on how the systems of the police service are being modernised.

The KSh437 million (US$5 million) integrated camera and traffic lights system will be based at the office of Kenya’s inspector general of police at Jogoo House.

The centre has 80 screens and several number of telephone lines, which the officers manning it will be using to coordinate operations in the city.

HumanIPO reported last week the traffic cameras are set to capture registration numbers of offenders’ vehicles and photograph their faces, which will then be relayed to the server room situated at the Nairobi county headquarters.

More than 51 cameras have been installed within the city enabling live video streaming as well as recording for future necessities.

“Let offenders beware because now we are watching almost every corner and we hope to reduce various crimes by a big margin,” said David Kimaiyo, inspector general of police, at the launch.

“It will have an impact on the city, which has been grappling with attacks linked to different crimes including terrorism and daily robberies.”

He said the project will further be rolled out within estates in Nairobi to curb the rising cases of insecurity.