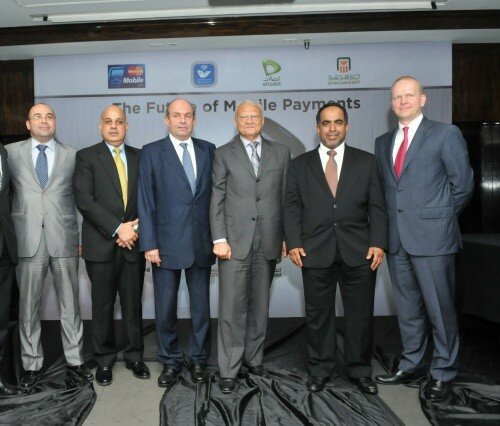 Michael Miebach, of MasterCard, Saeed El Hamli, of Etisalat Egypt, Atef Helmy, minister of communications and information technology, Amr Badawy, of the NTRA, Tarek Raouf, of the EBC, Sherif Elwy, of the NBE.

The wallet is called Flous, which means “money” in Arabic, and is compatible with any mobile phone on the Etisalat Egypt network.

Subscribers will be able to transfer money between users as well load or withdraw cash at more than 100 Etisalat branches and 305 NBE outlets across the country.

Mohamed Kamel Bayoumi, managing director of the EBC, said: “Our objective, together with the Central Bank and the Government, is to bring financial services to the fingertips of each and every Egyptian. This collaborative initiative will allow us to achieve that.”

Egypt has a mobile market of 94 million users, with more than 20 million of those signed up to Etisalat.

Since the huge success of M-Pesa in Kenya, mobile networks and banks across Africa have looked to replicate its impact in other countries.

The potential of mobile money stems from the large numbers of unbanked on the continent. Across Africa it is predicted to be 80 per cent, while in Egypt 65 per cent lack access to formal banking.

Saeed Al Hamli, chief executive officer (CEO) of Etisalat Egypt, said: “Mobile phones can be used for far more than calls and messages. In a world where smartphones and mobile browsing have become commonplace, it is only natural that mobile devices be used to conduct everyday transactions, especially with their current levels of penetration in the Egyptian market.”