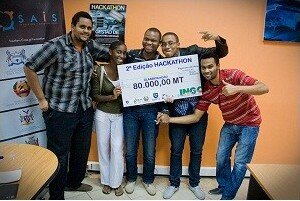 The winners of the second Mozambique hackathon, which took place in Maputo last week, have been announced, with DoEverythingIT taking the top prize of MZN80,000 (US$2,600).

The event was organised by the Mozambican Ministry of Science and Technology, supported by the Southern African Innovation Support (SAIS), Sweden and Finland.

DoEverythingIT scooped the top prize for their idea of sending data on rainfall and water levels, collected from the Zambezi River upstream, to authorities who are able to issue timely warnings to people living downstream from the river via mobile messaging.

Teemu Seppälä, senior expert in STI services for small to medium enterprises for the Programme of Cooperation in Science, Technology and Innovation between Finland and Mozambique (STIFIMO) and the Ministry of Science and Technology (MCT), spoke to HumanIPO about the success of the hackathon and the development of Mozambique’s startup ecosystem.

“Altogether we got more than 57 pre-registered participants, 55 showed up and finally 32 (seven teams) took part in the whole hack and were able to develop a prototype and pitch to the jury after three days of intensive work,” said Seppälä.

“The average age of the participants was just a little more than 20 years, [which is] why the training was more focussed on basic Android [development] and pitching skills.”

Seppälä added: “The main coach Aubrey Malabie, entrepreneur in-residence from mLab [in] Pretoria, got positive feedback and continued his working with some of the guys who also took part in our first hackathon in March this year.”

Furthermore, the winning teams are still in their pre-incubation stage and are not yet considered as existing startups, according to Seppälä.

Taking from his 10 years experience, Seppälä said: “The enthusiasm is high, we have a great number of talented people here, but the skills are still at the early stage, [which is] why we still have to concentrate building up basic technical [skills] and business capacity in order to get successful Mozambican startups.

“The whole startup ecosystem doesn’t exist in Mozambique and building the ecosystem is also an important part of STIFIMO activities. The local challenges are quite unique and cultures are rich, which allows development of fascinating apps.”

Seppälä believes applications local to Africa could possibly have value for other parts of the world.

Furthermore, he believes Africa’s specific demands and design capability is likely to result in African startups making a considerable impression on the world in the future.

“It was really interesting and encouraging seeing them adapt the technology to the local circumstances and it showed that there exists a great potential to create apps that are directed straight to the local communities in the future,” said Seppälä.