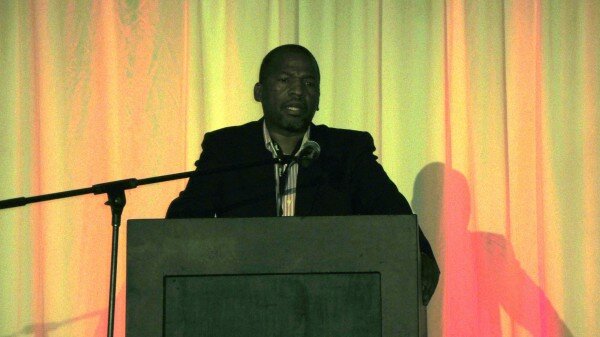 Vika Mpisane, general manager of ZADNA, speaking at the iWeek conference, in Johannesburg.

South Africa needs to once again take the lead in the internet arena, as the reviewing of the country’s ICT policy gets underway.

The ZA Domain Name Association (ZADNA) has spoken out on the need for South Africa to catch up as role player in the digital industry with the help of bodies such as the Department of Communications (DoC) and the ZA Central Registry (ZACR).

Speaking on behalf of Hasukh Gajjar, chairperson of ZADNA, Vika Mpisane, general manager of ZADNA, delivered the state of the .ZA nation at the iWeek opening in Johannesburg today (Monday).

Expressing regret over the time taken in finally appointing a competent minister of communications, ZADNA feels the rest of the continent has leaped ahead in progress while the DoC’s issues were being resolved.

“It is regrettable that it has taken this long to put [in place] such an influential minister,” Mpisane said, referring to current minister of communications Yunus Carrim, who recently replaced Dina Pule.

“This is not good for South Africa and this is not helpful for the continent,” Mpisane said.

Aiming to develop human capital through diversification and making use of local skills and expertise, the promotion of the African digital economy is the intention.

“Leadership without fashion is what the people of the continent need to take on a lot more. Not only their participation, but their skills to support their assessment participation in the digital ecosystem as e-citizens,” he said.

Acknowledging dotAfrica as a valuable role player, ZADNA defines it as “an African solution for Africa by Africans”.

“We are very proud to let the entire team engage for transformation for Africa,” Mpisane said.

Quoting an excerpt of the chairperson’s speech at the Internet Corporation for Assigned Names and Numbers (ICANN) conference in Durban, he equated the democratisation of South Africa in opening new possibilities for citizens to the development of Convention for a Democratic South Africa (CODESA) offerings and making internet operations available to the public.