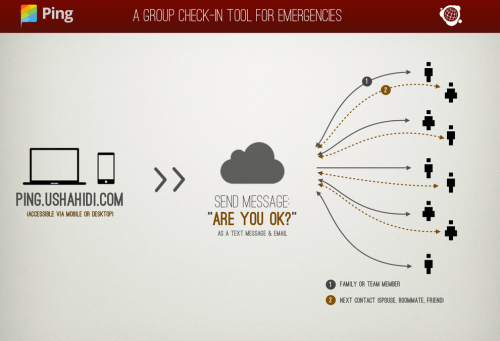 Non-profit Kenyan tech company Ushahidi has launched an app to make it easier for people to check on the condition of loved ones in situations similar to Al-Shabaab’s attack on Nairobi’s Westgate mall this weekend.

The company, which specialises in developing free and open source software for information collection, visualisation and interactive mapping, began building the app called “Ping” on Monday evening after the full Ushahidi team met and talked about the various issues surrounding the Westgate siege and the tools at their disposal.

From the talks it emerged the solution had to be something incredibly simple that required little thinking to use, would work for the simplest phones and would be available for anyone to use globally.

“We’re testing it out right now, the text messaging portion, we still have to get the secondary channel working (email), and then will add more afterwards,” said Ushahidi founder Erik Hersman.

“I’d expect it to be ready for use in the next day or so. There’s an Africa Hack Trip hackathon happening here in Nairobi on Friday, and we’re expecting it to get some real polish that day.”

Ping is a binary, multichannel check-in tool for groups that works by one creating a list of people (family, organisation), and each person also adds another contact who is close to them (spouse, roommate or boy/girlfriend).

When a disaster happens, the user sends out a message for everyone to check-in.

The admin then sends out a 120 character message that always has “are you ok?” appended to the end.

This goes out via text message and email, with more more channels expected to be added later.

Each of the responses is filed into one of three areas: responded (verified), not responded, not okay.

Every message that comes back from someone in that group is saved into a big bucket of text that the admin can add notes to if needed.

According to Hersman, the service is free to download because it is open source, but there is the cost of each message sent.

“Haven’t really gotten to the details on this right now, we’re just building a tool that we need and that we think others will as well,” Hersman said.

“If true, then we’ll come up with a business model for it,” Hersman added on plans to charge for the app.

Yesterday the team quickly wire framed out a list of needs, some design basics and an architecture plan to get a rough product going.

Designers are working to improve its design for both phones and computers.