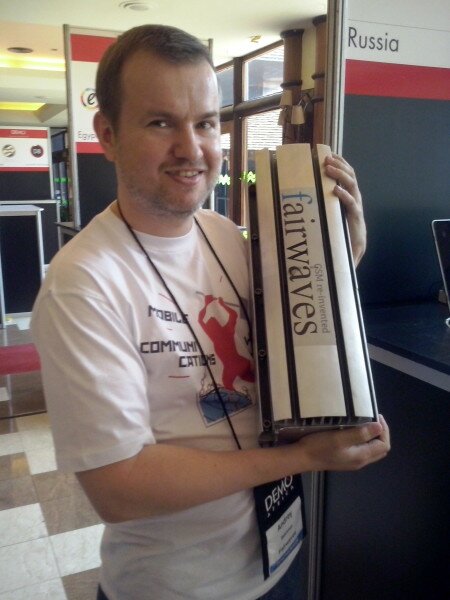 Russian company Fairwaves has created low cost base stations and has its eyes on rural and remote Africa as its next market.

The low cost GSM base stations come to a total of US$5,000, compared to current offerings which can amount to millions of dollars to set up.

The cheaper base stations can run also run on just 100 watts, similar to a domestic light bulb, and cover a 10km radius.

Andrey Bakhmat, chief operating officer at Fairwaves, said the devices are created with an architecture that combines the classic GSM interface from the user’s side and voice over internet protocol (VoiP) on the network side.

This architecture, combined with other open source technology, could connect a majority of rural Africa where commercial networks have so far not done so.

“These devices are quite cheap and a community of less than 5,000 people can contribute money and set in their location enabling them to receive GSM services,” Bakhmat said.

Fairwaves, which was among the companies to exhibit at DEMO Africa last week, is chasing a model that could see poorer people make free calls should it gain cooperation from various governments on the continent.

Bakhmat said spectrum regulation is expected to be the biggest hurdle to his company’s dream and opposition from telecommunication companies is expected.

“In Mexico where we have already deployed our masts people petitioned their government to allow them to use spectrum for their needs since big operators had shunned them, and the Mexican governments has allowed them,” he said.

In Kenya, the company said it will be seeking to create partnerships with county governments especially in far flung areas to supply their constituents with telephony services.

Apart from Mexico, Netherlands has also opened up part of its GSM spectrum with a requirement that masts must not be above 10 metres from the ground while in Russia testing is ongoing with operators.