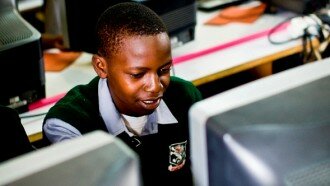 The British Council and Bharti Airtel will provide high speed broadband connectivity of 5GB per month in a three-year deal for 127 digital hubs located in schools across nine countries in Africa.

The internet access, which will be accessible to British Council hubs surrounding schools and communities, will guarantee teachers and students new education opportunities.

“The British Council connects teachers and learners around the world, so they can learn from each other, accessing knowledge and ultimately become global citizens,” said Brown. “It is not always possible to make these connections face-to-face and moreover web-based connection allow for greater numbers of beneficiary and this is now a reality thanks to the partnership with Bharti Airtel and Micros.”

“We are very excited to be a part of this initiative and we hope through our partnership with the British Council, that this initiative will be able to connect thousands of students and teachers and will also empower the local community with IT skills that will enable them to be more digitally enlightened and ultimately become more competitive in today’s fast changing economy,” Somashekar said.

HumanIPO reported in September the British Council had launched Badiliko digital hubs, an initiative that seeks bridge the digital divide by allowing students in Africa access to ICT.