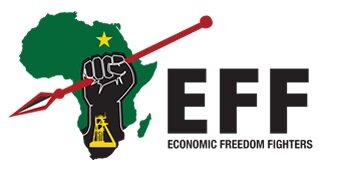 The Economic Freedom Fighters (EFF) marched to the office of Nomvula Mokonyane, the premier of Gauteng, to hand over a memorandum demanding the scrapping of e-tolls on the province’s freeways on Friday.

The memorandum referred to millions of South Africans having expressed their disapproval of the e-toll system through radio talk shows, in memoranda, and in newspaper articles, and dubbed e-tolling as “double taxation.”

“The EFF, the vanguard of the South African protest movement, comes here today to speak in the name of the majority of Gauteng citizens and indeed the whole of South Africa,” said the EFF memorandum.

“Whilst it is not surprising that the ANC (African National Congress) government has closed its ears and heart to millions of people who have taken to the streets, including the labour movement, the unemployed, the youth, the hawkers, the professionals, the taxi owners to voice their disapproval of the e-tolls, still we must act against injustice.”

Aside from accusing the ANC of being deaf to the widespread opposition to e-tolls, the EFF has likened the ANC government to the Pharaoh monarchy of ancient Egypt, particularly the biblical portrayal of the Pharaoh not heeding the call to end slavery despite the floods, fires and plagues which supposedly inflicted the area thousands of years ago.

“Like Pharaoh, the heart of the ANC government is the heart of stone, only prepared to be melted by money and personal enrichment,” said the EFF.

“We are here to declare our disapproval of your arrogant, undemocratic, disregard of the will of the people. We are here to add our militant voice in show of disgust of your oppressive and corrupt ways.”

The EFF said Friday marked a new journey, which will make the “undemocratic” e-toll system unworkable and does not recognise the e-toll law because it is unjust, and is a law designed to “rob people”.

“We are here to say we are Africans, who belong in Africa; the Africa of Malawi, of Kenya, of Ghana, of Nigeria and we have no desire to be like Europe,” said the EFF.

The EFF went on to describe Europe as a “murderous” continent “drained of human spirit,” built on slavery, colonisation and exploitation, and which “plunged the world into two world wars”. Therefore the EFF believes Europe is in no way a continent to emulate.

“We are Africa… and we love our Africa, thus [we] will never accept you insulting us and our humanity in the name of forcing us to accept your unjust e-tolls. We therefore call on our people, the people of South Africa… not to buy your e-tags. We say; we don’t owe and we won’t pay!” said the EFF.

The EFF’s memorandum effectively demanded the government must announce within two weeks South Africans are free from the “anti-African e-tolls slavery”, otherwise it will embark on a civil disobedience campaign to bring down e-tolls.

“If you do not we will take Nelson Mandela’s mandate into action and do to the ANC government, what we did to the National Party government of Apartheid,” said the EFF.