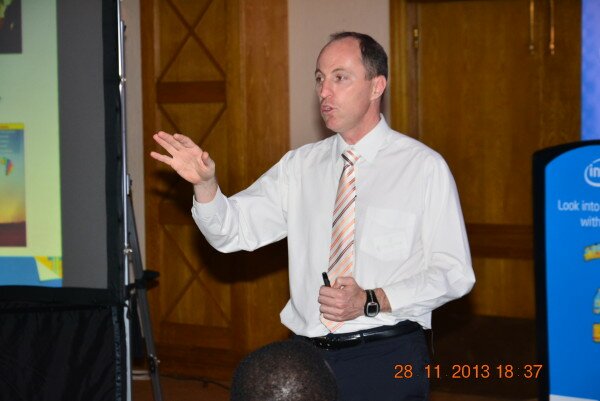 Intel hosted chief information officers (CIOs) from the Kenyan IT ecosystem last week, in a bid to shed light on how the company is preparing the country’s enterprise market to fit into the future of dynamic IT and shared its next generation technology vision to its partners.

The evening event aimed to take into consideration the young generation workforce which is constantly demanding technology freedom and the thin line between their work-life through use of powerful computing systems.

“They might not be the first users of technology, but they understand how it works,” Danie Steyn, general manager of Intel East and Sub-Saharan Africa, said.

“Intel has trained over a million teachers in Kenya on how to use technology in classrooms in addition to launching student partner programs.

“To the company, numbers are important because they define the technology experience, as Intel celebrates 45 years of computing.”

The company, which has been in Kenya for six years, said it has worked with teachers and trained developers on how to commercialise their ideas and break down concepts in ways that allow consumers to move from being only data generators to intelligent consumers.

“Going forward, we will see the PC reinvent itself,” said Steyn. “With desktops shrinking a lot in the consumer space and mobility taking over occupying 84 per cent of the PC market, geared by the annual compound growth of tablets at 41 per cent.”

Susan Mbogo, channel manager at Intel East Africa, said Intel would continue to focus its 10-year vision on devices and people by serving technology to the consumers’ doorstep and bringing all stakeholders who surround the consumers into supercomputing.

HumanIPO reported in October Intel had introduced the fourth generation processors in Kenya, best suited to handle heavy processing workloads in the line of supercomputing at DEMO Africa.

He added this would be mainly used in research and development institutions that utilise high power, high performance components to achieve all these.