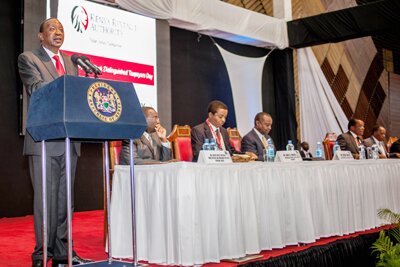 Kenyan president Uhuru Kenyatta has announced reforms at the Kenya Revenue Authority (KRA) including the automation of the tax system to enable Kenyan taxpayers to submit their returns from the comfort of their offices and homes.

The president was speaking yesterday (Tuesday) when he presided over this year’s KRA Taxpayers Day and award ceremony at the Kenyatta International Conference Centre (KICC).

“By March 2014, we will have rolled out production accounting under the excise tax management system. All firms dealing in products that attract excise duties will be covered under this roll-out,” Kenyatta said.

He said all required payments will be made through the planned single portal.

“The roll-out of the National Single Window system is scheduled for the end of this month, midnight of October, 31, 2013 and will commence with pre-clearance live of the documentations which I have mentioned earlier,” Kenyatta said.

Kenyatta also announced the KRA will be split into two semi-autonomous entities – the Domestic or Inland Tax Agency and the Customs and Border Control Agency.

During the occasion, Safaricom was announced as the country’s top tax payer, followed by East African Breweries Limited (EABL) and the Teachers Service Commission (TSC).

During last month’s African Internet Governance Forum (AfIGF) the government announced it would roll out digital signatures in the next two months to ensure an online identity and verification system to enhance security for online transactions.

HumanIPO also reported in September the KRA had signed a KSh1.1 billion (US$12.6 million) financing deal with Trademark East Africa for a new custom system to replace its current electronic clearance online system.