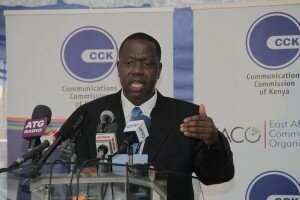 The Kenyan government will establish a national spatial database bringing together information from all government agencies in a bid to make an easily accessible system for Kenyans, according to cabinet secretary at the Ministry of ICT Fred Matiangi.

Capital FM reports Matiangi told the International Customs Day at Kenya Revenue Authority (KRA) the database would assist natural resource management and socio-economic development by allowing information to be accessed and shared to assist in decision-making.

“It will bring coordination so that information that is available in the Ministry of Lands, Kenya Revenue Authority, and other agencies is put together so that we can create a coherent comprehensible searchable spatial data framework,” he said.

“We are putting in place a consultation framework so as to create a system that is acceptable to all Kenyans.”

Matiangi also said, as directed by President Uhuru Kenyatta, Kenya’s national payments system will be digitised by April this year.

HumanIPO reported in May  Dr Bitange Ndemo, the outgoing permanent secretary at the ex-Ministry of Information and Communication, had said Kenya’s previous government should have digitised every registry, with the failure to do so now holding back the economy.

This is a situation Kenyatta’s government seems intent on putting right, with it this month starting the process of overhauling the KRA customs clearing system – the Simba system – by floating a tender for a consultancy firm that will steer the process.

It was announced in November the Kenya National Bureau of Statistics (KNBS) is set to be digitised in a move to enhance the quality of data it provides to users, while in the same month a partnership between the government and IBM was announced to digitise state functions to improve service delivery.

In July last year the Kenya Ports Authority (KPA) implemented its anticipated full IT structure that seeks to capitalise on its growth through the port of Mombasa.